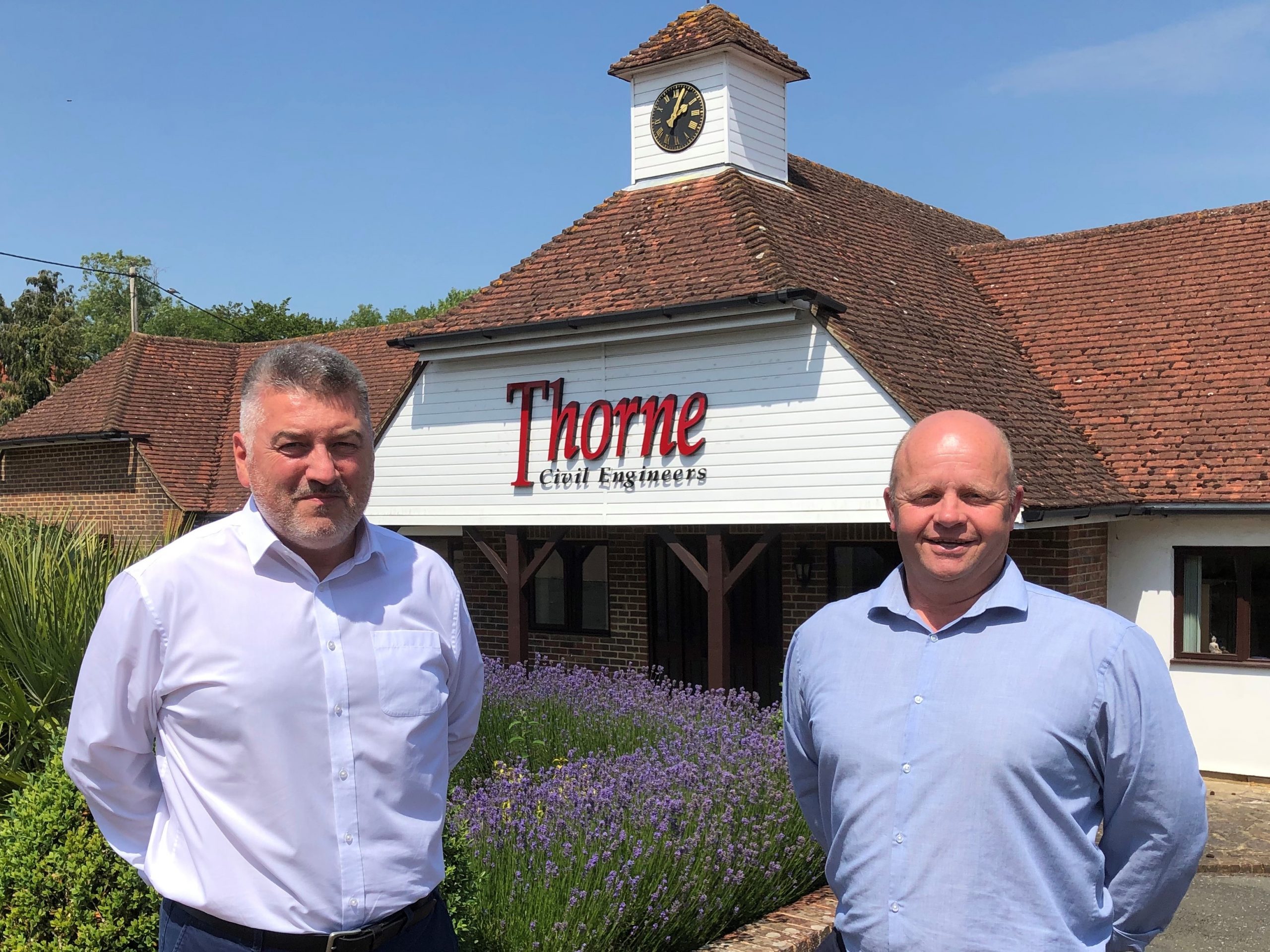 We are delighted to announce the appointment of Sean Taylor (right) and Alan Skipper (left) as Directors of C J Thorne & Co. Ltd. Sean takes on the role of Contracts Director after more than 30 years with the Company, during which time he has earned huge respect from both colleagues and clients, many of whom ask for Sean by name, such is the reputation he has established.

Alan becomes Operations Director after 18 months with the Company, preceded by stints with Plumbridge Contractors, P J Brown Ltd. and 12 years at Clancy Docwra. His experience and contacts in the Utilities Industry have already begun to open doors to new customers as existing clients’ budgets have shrunk due to term contracts coming to an end and the inevitable impact of Covid-19 taking effect.

Jim Fraser takes over as Chairman of the Group, which includes Hobart Paving Company and J P Hunter Surfacing, with Chris Thorne remaining as Managing Director. Each of the Executive Directors will continue to have a role in all aspects of the business as we look to drive forward more collaboration, innovation, efficiency and productivity across the board, embracing new opportunities across all sectors of our business. 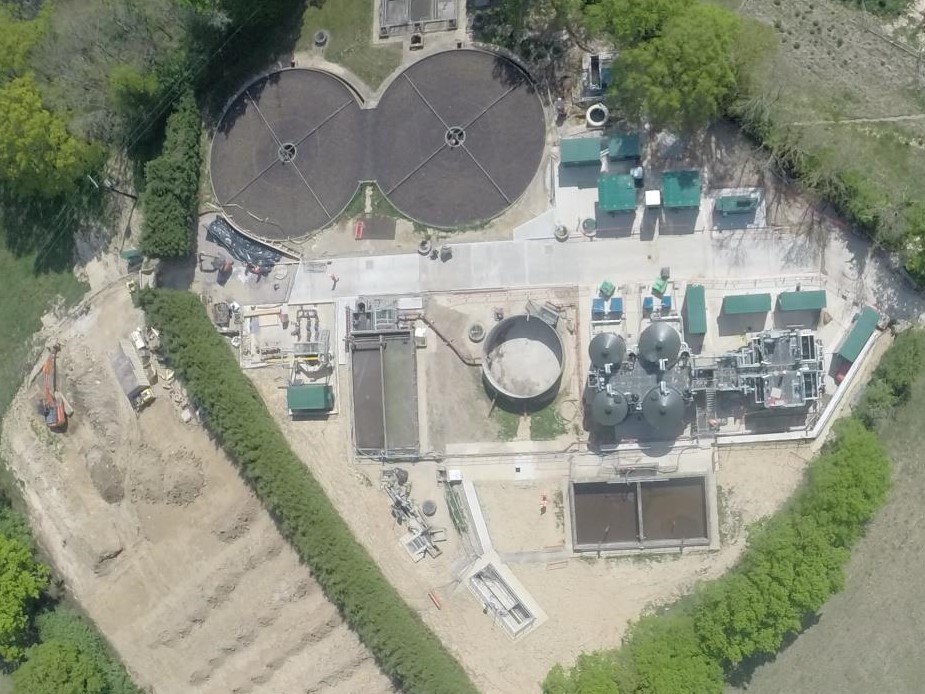 Work is nearing completion on the £1.5m refurbishment of the sewage works at Hooe in East Sussex. The compact site has created some significant challenges, but collaborative working from all parties has ensured that the tight programme was met and all key deliverables achieved by the regulatory date. Well done to Robin, Danny and the team on completing a high quality project. 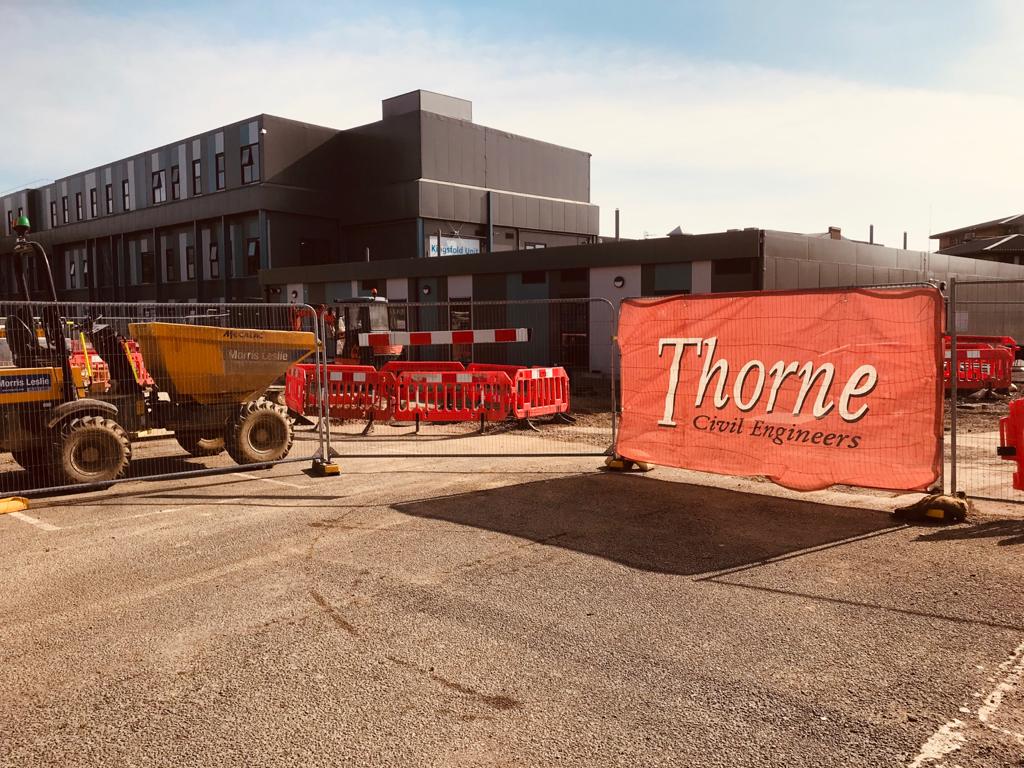 Work has been ongoing since December on the £500,000 contract to complete the groundworks / external works for a new off-site constructed ward to add to the hospital’s capacity. Our contract included construction of the foundations for the new ward, installation of utilities, reconfiguration of drainage, diversion of the perimeter road and a temporary car park for 200 cars. 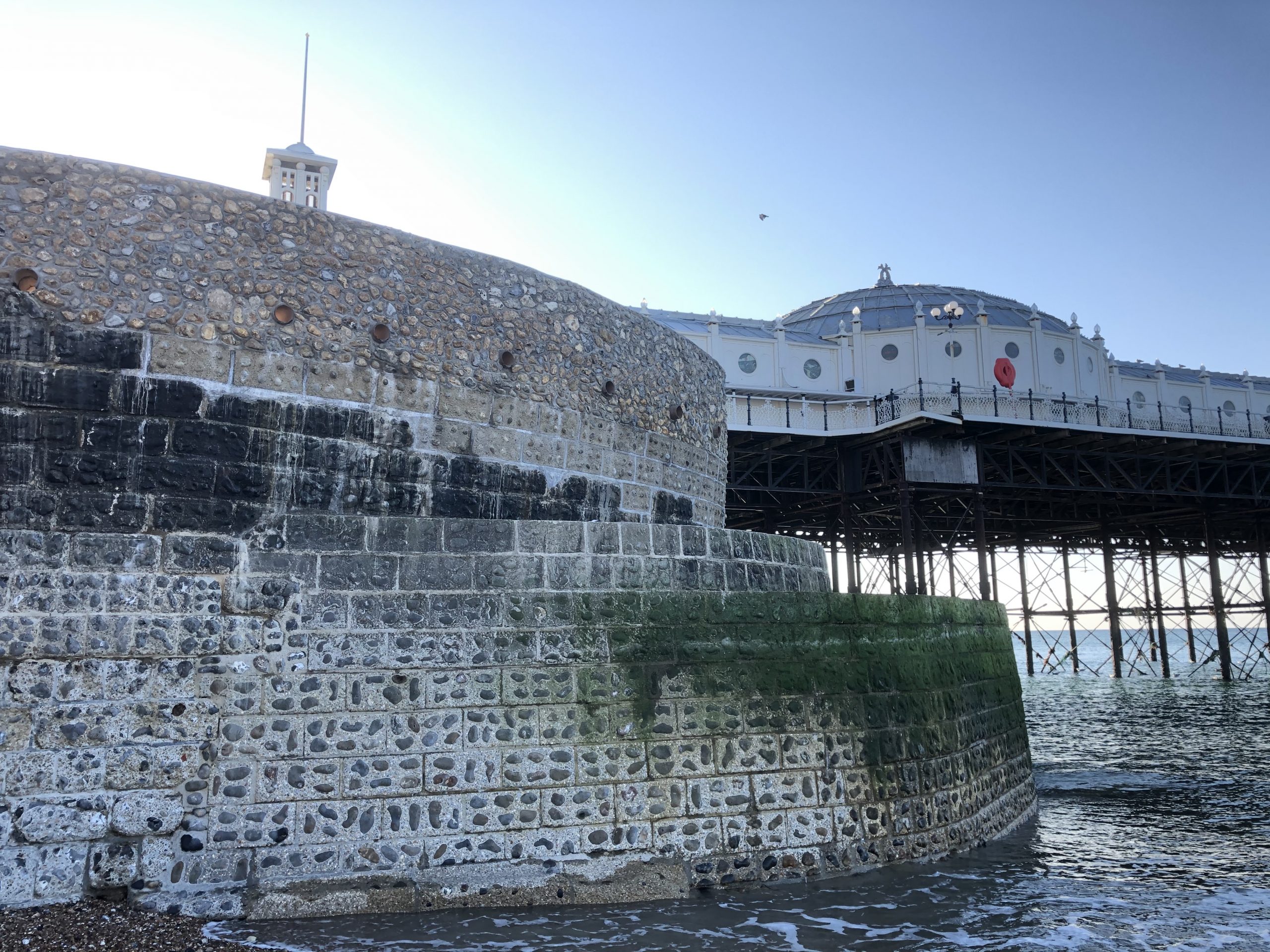 The work to restore the tip of Albion Groyne, situated alongside the Palace Pier in Brighton, has been completed by our craftsmen as part of our term contract for coastal maintenance for Brighton & Hove City Council. The groyne was severely damaged by heavy storms in February, but is now back to its best for the summer season as lockdown eases. 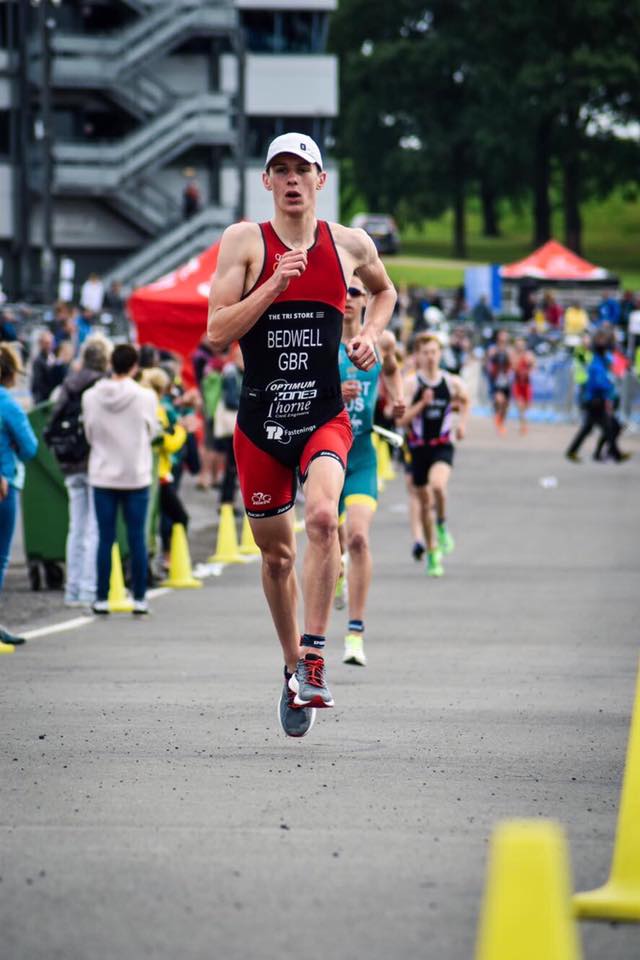 Spotlight on Uckfield Triathlete, Jamie Bedwell
“What goes around comes around”

No-one in the local area can deny that C.J. Thorne and Co. Ltd. is one of those companies who like to do their bit for the community. In fact, in November 2019 they were presented with an award entitled ‘Give Back to the Community’ at the Uckfield FM Community Awards, in recognition of many years of providing the town’s Christmas tree, providing vehicles for the annual Uckfield Carnival and supporting numerous local causes.

One such cause is an inspirational young sportsman by the name of Jamie Bedwell. CJ Thorne have been providing sponsorship for him since 2017, as he has continued to progress as a young triathlete.

Having played a wide range of sports as a youngster, including rugby, it was almost by chance that he found himself trying out for a local youth triathlon at the age of 14, after being handed a leaflet at school. Despite, in Jamie’s words, ‘doing terribly’ in the trial – swimming mainly breast-stroke and falling off his bike – he loved the experience and decided to take things further by joining a local triathlon club. It all became a more serious endeavour by the time Jamie was leaving Uckfield College at the end of his GCSEs. Rather than staying at Uckfield’s 6th Form he decided to study Sports Science at the Eastbourne campus of Sussex Downs College, which was close to his training ground, and so began the arduous and punishing daily training schedule where his day would begin before sunrise and involve a lift to and from Lewes Station from Dad, as well as several miles of cycling between the station, the training ground and the college campus.

Needless to say, all that hard work paid off and his training has taken him from strength to strength, regularly competing on the British Triathlon circuit.

When the time came, Jamie chose the Eastbourne Campus of Brighton University as his uni choice, studying Podiatry. It seemed an obvious direction to follow. He had experienced podiatry treatment himself, as an athlete; he’d learned things from his part-time job at Clarke’s Shoes; plus, his Mum is a podiatrist!

Fast forward to today and Jamie is a 21 year old married man, a graduate and a fully qualified, working podiatrist, still training hard with his sights set on one day representing Great Britain at the summer Olympic Games, but getting where he is today has had its trials and tribulations. A few weeks after starting his degree course he was involved in a terrible road accident whilst out for a run. The driver of a 4×4 vehicle failed to see him and he suffered multiple injuries, including two broken vertebrae. Jamie was determined to remain positive about what the future held, and his positivity and support from family and friends helped him through.

His physical recovery was remarkably quick and he was back in the swimming pool a month later. However, Jamie admits his emotional recovery was probably not too healthy. “Looking back, I think I was caught up in a whirlwind of what was going on.” It wasn’t until about 18 months later, at a sports therapy acupuncture session, that things came to a head and he found himself in tears. Since that moment, he has spent a lot of time coming to terms with everything and working out what is important to him, helped by counselling and a belated honeymoon in Canada in October 2019 with his wife, Abi.

He is still passionate about his sport, but acknowledges that there must be a proper balance between home life, family time, work and training. “I want to do sport, but I don’t want to be trapped in sport as my identity.” He works 3 days a week in the NHS and one day at his Mum’s clinic, giving him one full day in the working week for training in addition to training before and after work and at the weekends.

Dealing with patients also helps to keep him grounded. After several years of being involved within the sport Jamie tries his best not to get too hung up on missing the occasional session.

At the end of the 2019 season, Jamie took another step closer to reaching his goal of competing in the European Cup series. The 2020 season will see him continuing to fit in approximately 20 hours a week of training for the British Series, and he feels he’s in a good place physically and emotionally to face challenges that the season brings. If he qualifies for the European Cup series, this will offer him the opportunity to progress from the Under 23 category to becoming a senior athlete and, more importantly, another step closer to competing in the Olympic Games.

Jamie’s Olympic ambitions are not his only motivation for success. He yearns to do something good and feels that, should he ever achieve fame as a sportsman, he wants to inspire change as a role model to a growing society, both locally and around the world and use his fame for positive influence. He is already campaigning to raise awareness about the use of plastics in the cycling industry. “In sport, if people know who you are, follow your journey, put their trust in you, then you have a platform to enable massive change. It also becomes less about you when you have a community invested in believing in you.” said Jamie. “Everything I want to achieve isn’t just about my efforts. It’s also thanks to support and the community that I have the chance to achieve my goals. I love the idea that I can take the support I have received and bring it around full circle.”

Sponsorship from C.J. Thorne & Co. over the past two and a half years has helped go towards Jamie’s coaching, travel, race fees, new kit and a new bike frame. This year’s sponsorship is going towards a new set of carbon wheels for his bike. They’re lightweight and aerodynamic and will last for many years to come.

Jamie said “I’m so grateful to Thornes. As I see it, they’re a great example of giving back to the community and part of the inspiration for what I’d like to do in the future.”

C.J. Thorne’s Managing Director, Chris Thorne said “When I first met him I was very impressed with Jamie’s maturity and determination and it was a straightforward decision to support him – watching him overcome the adversity of when he was knocked down and seriously injured has been inspiring, and his steady progress over the last couple of seasons is testament to his self-belief and desire to succeed. We are proud as a business to be associated with him.”

One thing is certain… Jamie Bedwell is an extraordinary young man and everyone at C.J. Thorne and Co. looks forward to following his progress with a close eye. 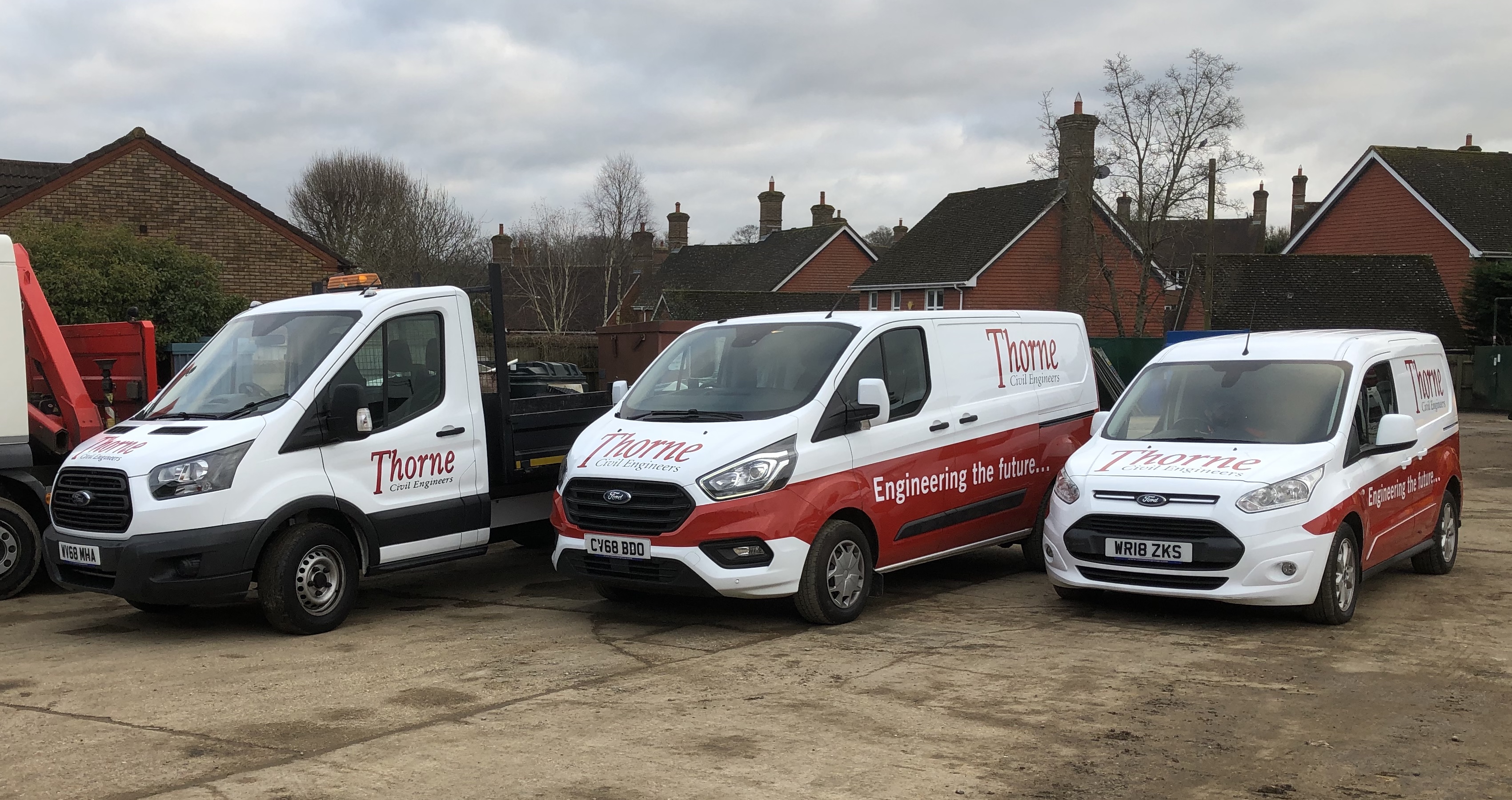 The Company has recently undergone a £250,000 programme to update the Company fleet. We’re very proud of our new, sign-written vehicles. The photo shows just 3 of them but there are more! Look out for them on the roads, and feel free to give our drivers a wave if you see them!

We’re proud to announce that we have received another prestigious award, this time, at the 2019 Uckfield FM Community Awards, where we were presented with the award entitled ‘Give Back to the Community’ on Friday 8th November. Having been active in supporting the community for many years, it is wonderful to receive recognition for this. We have provided the Christmas Tree for Uckfield since 1951 in addition to the lorry to transport it to its place by Nat West Bank. We provide trucks for various community groups to decorate for the Uckfield Carnival. We have been active in sponsoring such things as the Uckfield Business Awards, local charities, am-dram organisations and Uckfield Rugby Football Club. As a local family business that has gone from strength to strength over the past 8 decades, these things are just our way of giving back, so thank you to all the Thorne employees who are a part of this vibrant team effort.

On the evening of 27th September, 2019, CJ Thorne & Co became the winner of three prestigious awards across two separate events!

We can’t stop smiling! Thank you to the judging panels for recognising our achievements, and special thanks to the amazing workforce at CJ Thorne & Co… It may sound like a cliché but it really has been a team effort. What a fantastic way for us to collectively celebrate our 80 years in the industry.

On Saturday evening CJ Thorne and Co were proud sponsors of one of the races at Hove Greyhound Stadium, in celebration of our 80th year in the Civil Engineering industry. Pictured are some of the staff, posing with Truffles, the race winner. 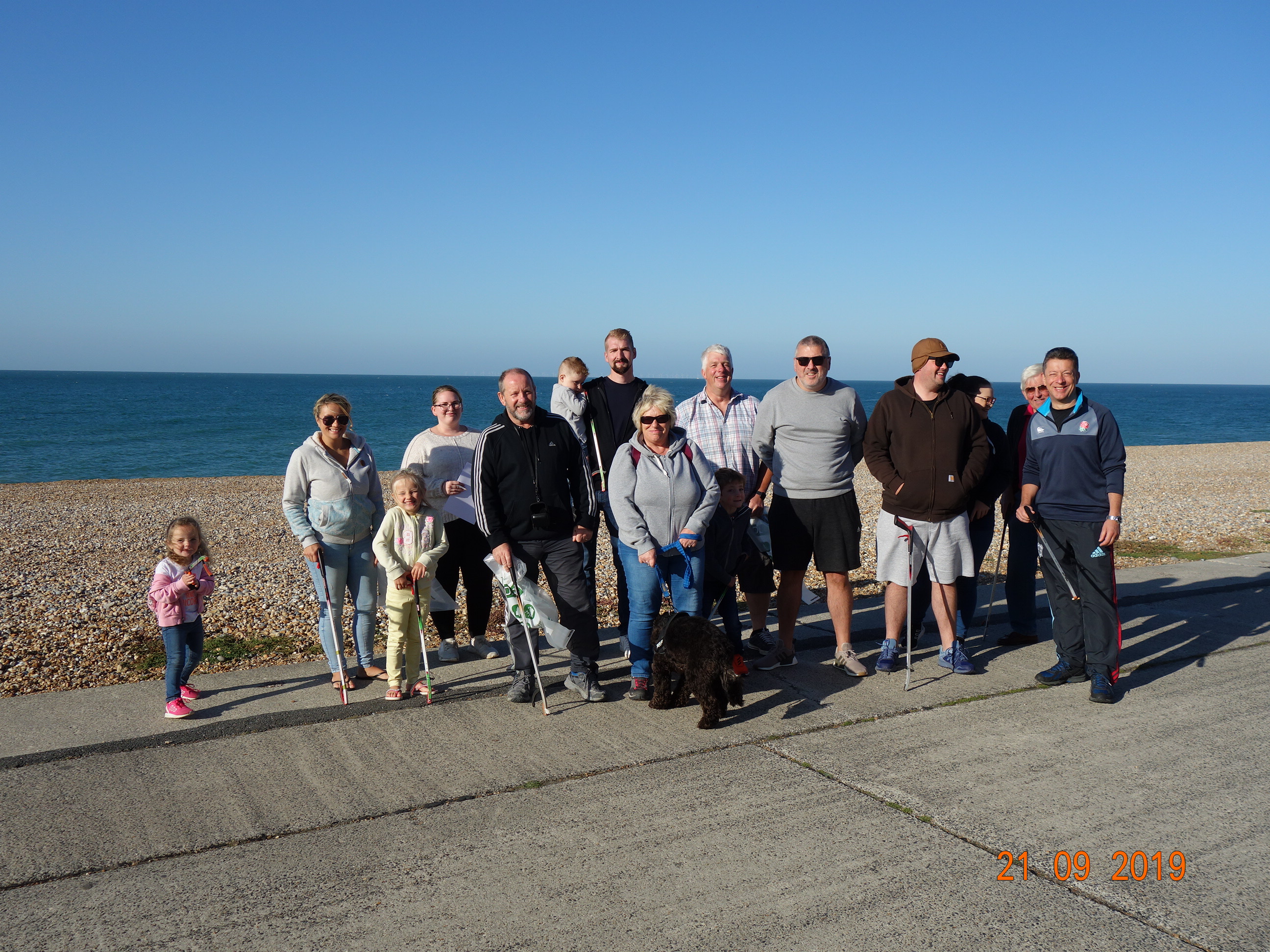 Huge thanks to the team of CJ Thorne staff and their families who volunteered, at the weekend, to participate in the 2019 Great British Beach Clean, organised by the Marine Conservation Society. The lovely weather was a great help, down on Seaford Beach, but ultimately, whatever the weather had in store, the Thorne volunteers were ready to roll up their sleeves, as a business from the local community, and take a share in the responsibility to help look after our environment. Associate Director Alan Skipper said “We were pleasantly surprised to find the beach in a clean condition. It was refreshing to learn that the local community regularly volunteer their time to keep the beach clean! But still our efforts collected 2 bags of rubbish which included the normal culprits of small plastics, cigarette butts and fishing lines.” It’s a timely reminder for us all to take our rubbish home and recycle it!